Taking responsibility for our actions.

We created this business to make a difference in the world – both through the projects we invest in and the way that we operate.

Actions speak louder than words, so we’ve embraced guidelines and established processes that give us a practical path toward making a tangible difference.

Guiding our commitment is our Statement on Equity, published in the transformative summer of 2020:

We, the individuals who make up Leyline Renewable Capital, have found ourselves galvanized as millions of citizens have taken to the streets to protest the violent murders of countless Black men, women, and children at the hands of unjust systems of power – and to demand change that is long overdue. Some of us have participated in the protests. Yet it is clear to all of us that we benefit from the same unjust systems that we denounce. Renewable energy, as one example of structural inequality, is an industry in which Black people are grossly underrepresented. We’ve pursued careers in this critical, impactful field without being accountable for how little we include voices from communities of color in its development.

As a company, Leyline Renewable Capital has been watching, listening, and reflecting – and is now taking action so that we are part of the meaningful, decisive change that the protests are calling for. We can easily say Black Lives Matter. Today we join with our local, national, and global communities in the hard work of making that statement a reality in our society.

As a point of beginning, Leyline is identifying specific areas in education, finance, and employment where we can contribute to systemic change. We will work to open more doors in renewable energy to Black students and professionals and other people of color. We commit to reporting publicly on a quarterly basis on the progress of our contributions to the solution. We call on our peers in renewable energy to do the same. Most importantly, we adopt a posture of humble service, willingly offering our personal, intellectual, and capital resources, but also agreeing to be led in their use by the Black institutions, communities, and individuals we seek to serve.

And here is how we are working to put this commitment – and our larger collective dedication to environmental impact and social change – into action:

We’re intensely focused on addressing the long-standing and too-often-ignored racism that permeates our society.

We explicitly acknowledge operating within unjust systems of power. We are actively working to implement internal processes that remove the stain of systemic racism and open doors for Black students and professionals, as well as other people of color, gender-diverse individuals, and others who are routinely excluded from economic and social power, and from the renewable energy revolution in particular.

In June 2020, we set up the Leyline Addressing Racism working group to identify particular areas where we can contribute to systemic change.

Our strategy aims to introduce renewable energy as a knowledge area and career option to people of color, through active skill-sharing at important points along their educational path – from high school environmental clubs and undergraduate academic departments to professional school career offices and post-graduate professional associations. By making available both a general understanding of renewables and specific instruction on engineering, finance, law, public policy, and environmental science, we can reach, educate, and inspire more students and increase the number of Black candidates for future employment.

Leyline is rigorously reviewing how the obvious tools for hiring – from job descriptions, to where we post openings and the ways we evaluate resumes and conduct interviews – may work to exclude excellent and diverse applicants. We are actively seeking guidance and resources to improve our tools and alter our processes to recruit more Black candidates.

Just as important, we are taking a hard look at our own inherent biases and habits of mind that may drive a “business as usual” mindset in employment. As part of this self-assessment, we are learning how to recognize and reduce the effect of these biases, and developing new employment behaviors that encourage candidates to share their diverse experience and perspectives. We are always looking for new people with a range of views and backgrounds who will help our company thrive. As our efforts to use more inclusive recruitment tools and establish an open-minded hiring environment reinforce each other, we expect to see more Black people connecting to job openings at Leyline.

We are actively seeking out opportunities for Leyline’s financial capital and development expertise to be a changemaker. Currently, we are building contacts and partnerships with nonprofits and financing peers to identify projects in lower-income communities that promote equitable access to renewable energy. We will utilize our skills to simplify project financing, streamline the daunting development process, and overcome execution hurdles to help communities and nonprofits develop worthwhile projects in their neighborhoods.

With a portfolio of renewable energy investments, we obviously factor environmental goals into every project we take on. But we strive to go beyond that and find ways to perform well on a range of impact metrics.

We’ve adopted the broadly accepted Environmental – Social – Governance (ESG) criteria, which serve as markers for tracking how well an organization meets and makes progress across a range of environmental, social, and governance categories. Investors use ESG criteria when weighing where to put their money. We use these standards to hold ourselves accountable.

Every quarter, along with reporting on our anti-racism work, we measure ourselves against several ESG targets including: Have we reduced carbon emissions? Have we improved company practices to support diversity and the financial and physical well-being of our staff? Are our decision-making processes fair and equitable?

Quarterly reports from the Leyline Addressing Racism working group and our ESG performance can be found here: 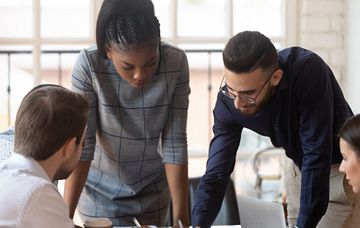